The ONE word I did not like in Trigger Mortis 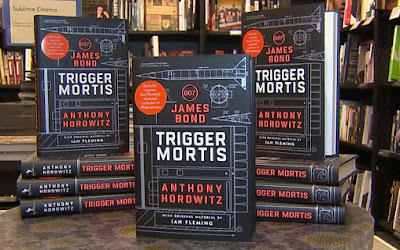 During the weekend I finished reading TRIGGER MORTIS. I am very happy to have read the black edition from Waterstone since it contains both some extra pages by Anthony Horowitz and also the manuscript by Ian Fleming with photocopied pages. The script was a synopsis for a planed TV series that luckily never happened.
So if you do not have the black edition in your collection I highly recommend that you get it. To be honest the treat for me was to understand how little of Flemings work Anthony had to work with and that just makes me like the book even more. Trigger Mortis is mostly his own creation and I do hope that he will write the next continuation novel as well!

Anyhow, let head down to page 192 and chapter 16 called The Lion's den of Trigger Mortis. James Bond wakes up in a hotel to watch Jeopardy Lane swimming.

"She was wearing a flesh-coloured costume  that, for a moment, gave the illusion of complete nudity. Bond looked at the water separating on either side of her behind which was small and round, like a child's".

The word I dont like here is off course child's.
I get the feeling that it is Jasmes Bond thought we hear here and that he enjoys looking at Jeopardy's behind even when it looks like a behind of a child. In my head this is far from okay and feels inappropriate. It feels like James Bond is attracted by a child almost. I remember reacting like I was looking at a female and suddenly it felt so wrong to stare.