Did you notice this in SPECTRE?

The day after the Royal gala premiere of the new James Bond film SPECTRE took place this Monday, IAN FLEMING PUBLICATIONS had their special screening of the film for family, friends and specially invited. Amongst the invited was Young Bond author Charlie Higson, Andrew Lycett (author of the Ian Fleming biography) and Kate Millis, fiction editor at Orion publishing who publishes the James Bond novels.

When reading there Twitter feed they all seemed to enjoy the film allot. I myself will have to wait until tomorrow at 14:15 (here in Stockholm Sweden) to see SPECTRE. Since hardly anyone has not liked it my expectations gets higher by the hour. I have not even seen a trailer for the film yet, kept my self totally in the dark not reading any interviews and so on.

IAN FLEMING PUBLICATIONS has posted a blog post on there website this Monday saying that there will be a scene in SPECTRE that has its origin from the COLONEL SUN book written by Kingsley Amis under the name Robert Markham in 1968. 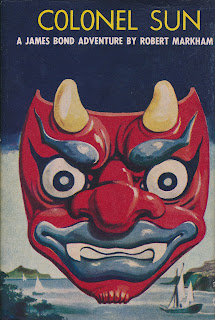 The Colonel Sun scene which features in SPECTRE is one of pivotal importance both to the film and the book and fans are encouraged to identify which part stems from Amis’ pen.
Corinne Turner, Managing Director of Ian Fleming Publications Ltd. commented that ‘The Fleming family and The Kingsley Amis Estate hope that fans of SPECTRE will be encouraged to reach for this thrilling book by one of the finest writers of the 20thcentury.’

Also out this week is another BBC Radio program about James Bond / Ian Fleming and Scotland. It is hosted by Robbie Coltrane who appeared in the 1995 James Bond film GoldenEye.
The radio program is called is called JAMES BOND: LICENCE TO KILT and can be found by clicking here. The show is 28 minutes long. Enjoy!

If you wish to buy your copy of COLONEL SUN and sponsor the blog at the same time you can do so by order your book on Amazon UK below.