Title sequence for FLEMING - The man behind Bond

Back in 2013 it was announced that Sky Atlantic would air a TV-Series based on Ian Flemings life.

The series was co-produced by Sky Atlantic, BBC America and Ecosse Films.

Later in the production the producers turned to British animation and graphics company Broken Antler to come up with ideas for the title design. The demand was that the title design should be distinctive and at the same time not a reproduction of a James Bond title sequence.

When Broken Antler started working on ideas for the treatment they proposed using shadows in the title theme. They had thoughts of using different objects that Fleming would have used during his time. And that idea sounds a lot like "still life series" of the Ian Fleming books that Pan Books released in 1976.

But that idea was scrapped due to the budget and the length of the title sequence being visible.
Since the title was to be visible for such a short period in each episode they decided that it should be more focused and delivered quickly.

They saw the script for the four episode series to be written as if Ian Fleming would have written his own autobiography and therefore it was therefore decided to go with a paper background and text written in old typewriter style as if Fleming himself was writing it.

Below you can see the different suggestions that Broken Antler had until they decided to go with the typewriter. They are all quite amazing. On top of this blog post you can see the actual title treatment that they went with.

Below is the Pan Books "still life" series from 1976.
(These are very hard to scan with good quality) 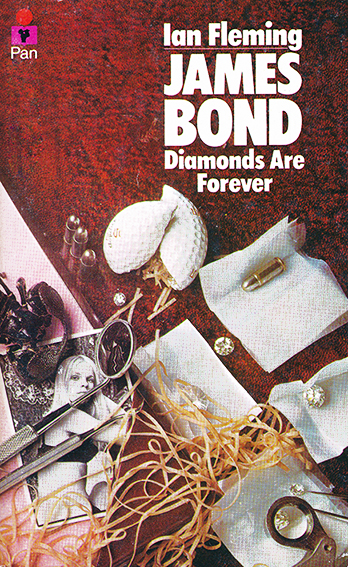 You can order the FLEMING TV-series below for below £6 nowadays.