Some Kind of Hero: The Remarkable Story of the James Bond Films 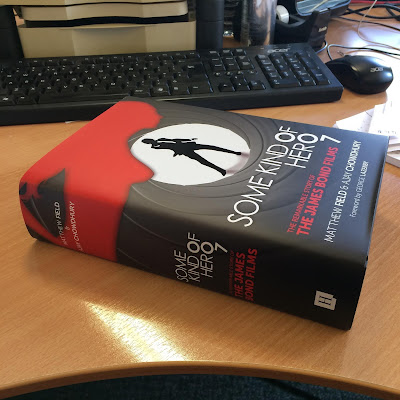 Here is the first picture of the highly anticipated book SOME KIND OF HERO
written by Matthew Field and Ajay Chowdhury and published by The History Press.
The book that has a massive 700 pages looks much larger and more interesting in
reality than I dared to hope for.

I am really looking forward to reading this brick of a book. The book is released
any day now because according to Amazon.co.uk the book will be released on
October 5th but it is still marked as "Not yet released".

Keep an eye on this blog when the book is released.

For over 50 years, Albert R. Broccoli’s Eon Productions has navigated the ups
and downs of the volatile British film industry, enduring both critical wrath and
acclaim in equal measure for its now legendary James Bond series. Latterly, this
family run business has been crowned with box office gold and recognised by
motion picture academies around the world. However, it has not always been plain
sailing. Changing financial regimes forced 007 to relocate to France and Mexico;
changing fashions and politics led to box office disappointments; and changing
studio regimes and business disputes all but killed the franchise. And the rise of
competing action heroes has constantly questioned Bond’s place in popular culture.
But against all odds the filmmakers continue to wring new life from the series, and
2012’s Skyfall saw both huge critical and commercial success, crowning 007 as
the undisputed king of the action genre. Some Kind of Hero recounts this
remarkable story, from its origins in the early ‘60s right through to the present day,
and draws on hundreds of unpublished interviews with the cast and crew of this
iconic series.

The photo above is borrowed from Matthew Fields facebook page.

You can buy the book on Amazon UK by clicking the cover below: