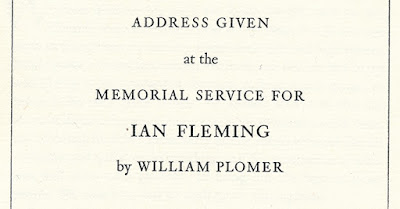 So what is the memorial address you might wonder.

Well Ian Fleming died on August 12th 1964 at the age of 56. He was buried on September 15th. At the funeral Flemings editor William Plomer had written an address about Flemings life and who he was.

This adress was printed in two versions. a softback in 250 copies and a much rarer hardback in 50 copies. All 300 copies came with an original plain tissue wrapper.

These are quite hard to come by and can cost a lot. I myself paid £300 for the hardback and £110 for the softback version. I found them both on Ebay. But if money is not your problem the hardback can be bought here for as much as £895.

The only problem as I see it is that I have trouble finding any evidence for the amount figures that are floating around between collectors. I have reread both the ending of Ian Fleming by Andrew Lycett and The Life of Ian Fleming by John Pearson and none of the books mentions these figures or the actual addresses at the funeral.

I have always said that the best Bond fans are those who very seldom collect anything, the ones who can stay calm and not buy anything. Like this address that you might wish to read once and then just own it in your collection.. So here is your chance. Jump over to SpyVibe were the entire Fleming memorial address has been uploaded at this link.

If you do have any knowledge from were the print numbers came from and what people was given the hardbacks it would be very interesting to take part of that information. Please get in contact below or any other way you see appropriate.

If you wish to read about my visit to Ian Flemings grave you can do so here! 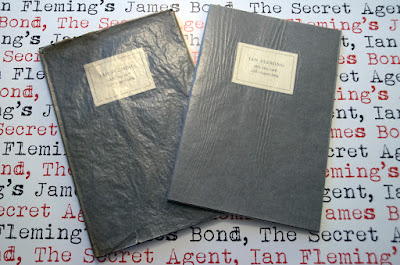 The hardback and softback version of the memorial address.