As soon as I learnt more and more about the world of James Bond I have always wondered if Douglas Wilmer was hired to actually play Ian Fleming in Octopussy. Or at least someone that looks like Ian Fleming and is called Jim Fanning in the film, a name that is truly close to Ian Fleming if you ask me.

I wished for a very long time that I could ask someone if this was the case.
And in 2014 the From Sweden with Love founder Anders Frejdh arranged a screening of Octopussy in Sweden with Director John Glen (amongst many others) in attendance.

So during the signing of autographs I had the privileged to sit next to him and pump him with questions between signings. And of course I asked him if Douglas Wilmer was hired to play an Ian Fleming lookalike character.

And he told me that so was NOT the case and he himself had never thought of the resemblance until I mentioned it. I was supprised by this and said that Douglas Wilmers character even dressed like Fleming and was called Fanning in the film. John Glen then said that this must have been by coincidence.

And maybe I will make some of you angry now but I just can't let this one go. Can it really be a coincidence that the character is named Jim Fanning wears a bow-tie (with dots) and looks like Ian Fleming? 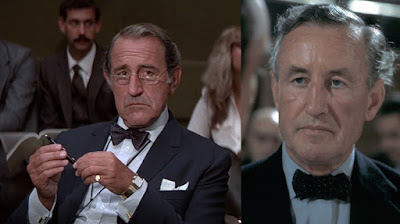