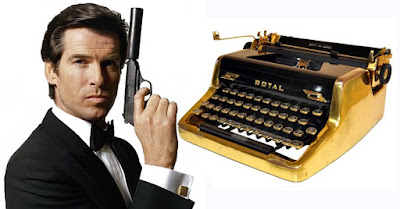 When Ian Fleming was writing his first James Bond novel CASINO ROYALE back in 1953 he was so satisfied with being done with the first draft that he ordered a golden typewriter from Royal typewriter company in New York at the price of $174. He then asked his friend Ivar Bryce to deliver it to him the next time he was visiting Jamaica.

Flemings golden typewriter has long after his death been famous for two things.

2. That it was said that the buyer at the action was Pierce Brosnan, the actor just about to play James Bond for the first time in GoldenEye.

I had the fortune to meet Pierce Brosnan for the first time back in the fall of 1995 when he was in Sweden to promote GoldenEye and my first question to him was if he actually had bought the typewriter. He sounded very serious when he replied "No, it's not me".

Regarding the most expensive typewriter it is no longer Flemings either. Writer Cormac McCarthy (who wrote NO COUNTRY FOR OLD MEN and THE ROAD) had his typewriter sold at an auction for $254 500).

But who actually bought Fleming's typewriter back in 1995? Well no one knows. It went to a secret buyer. Even EON productions have had an article on their website asking if anyone wish to com forward regarding the true owner.