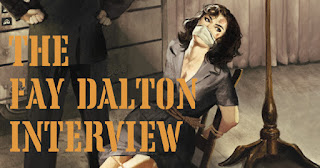 It took me months to get it approved but just days after Christmas I have been able to arrange an interview with Fay Dalton.
As many of you know Fay Dalton is the illustrator for The Folio Society James Bond series that will continue to be produced until the whole series is done.


But I guess that in true Christmas spirit our online interview with Fay was possible at last. So lets get to it straight away.


1. How did you react when asked if you could do the Bond series for Folio?

Fay Dalton:  I was delighted and super excited but nervous to illustrate such a prestigious and loved series and to do fulfil such an epic brief with finesse and accuracy. I’ve been a fan of Bond since the first Bond film I saw as a child and never thought I’d get the chance to illustrate the original Fleming series, feels amazing to be linked to such a celebrated iconic British character.

2. Have you read the books? Any favourite?

Fay Dalton:  My fav book and film is Casino Royale. Maybe it’s because it’s the first novel and Bond has his first love and betrayal but the characters and structure is just perfect.

4. Your drawings are amazing and captures that 50’s feeling so good. Is that what you specialise in?

Fay Dalton:  Yes I’ve been specialising in the vintage painterly style for around 7 years. I’m always trying to perfect the style and adore the original masters of the 50s/60s, McGinnis, Maguire, Frank mcCarthy, Vargas. Illustrating Bond gives me the opportunity to stay true to the era and as vintage as I can.

5. What material do you use when creating your drawings?

Fay Dalton:  I use a mix of mediums. My roughs are pencil, chalk and acrylic. When roughs are finalised I re work them in acrylic and scan in for digitally painting. Although digital I try to keep the illustrations looking as painterly and textured as pos being careful to preserve that slightly gritty vintage appeal.

7. Will your drawings ever be able to be bought as reprints. Many fans hope so.

Fay Dalton:  I would love to sell a small edition of prints of a few of my fav illustrations. When I get some time I’ll make sure to.

8. What kind of material do you use as inspiration.

Fay Dalton:  The books themselves, the characters, the environments and description. The original art from the James Bond vintage film posters. The artists mentioned earlier.

9. What is your favourite drawing from the Moonraker novel.

Fay Dalton:  I don’t have a fav but if I think it would be between Drax’s moustachioed men and Bonds dinner between the beautiful Gala and Drax.

10. Do you create more drawings than used in the final book?

Fay Dalton:  No I try to stick to the brief and we agree on the selected text to illustrate, sometimes I might do a few attempts or angles on the same  idea.

Of course I also asked Fay if she could tell us which upcoming novel she is currently working on but she declined to answer. According to SPYVIBE The Folio Society will release Diamonds are forever, Goldfinger and Thunderball during 2018. Lets hope this is true.

Email ThisBlogThis!Share to TwitterShare to FacebookShare to Pinterest
Etiketter: Interview