Received in the post today was two books from Penguin Random House and Ian Fleming Publications.

Tow days before the official release on Thursday (May 4, or may the force as millions of Star
Wars fans wish to call it) I received Steve Cole's final outing as the writer of the Young Bond novels.

The last and final chapter of the Young Bond books is called Red Nemesis and is released as paperback from Red Fox and limited edition signed hardback from Doubleday.

So what is so rare about my copy you might ask?

Well I received a hardback first edition (001) of the book that on the dust jacket says that it is signed but it is actually not.
I guess ha handful of hardbacks, first editions,  that were used for promotion were never signed and therefore they must be considered as extra rare. Maybe not that special for the average James Bond fan but for us hardcore book fans, this is a small treat.

Below is a short synopsis from the books dust jacket that differs from the one used on places like Amazon.

Teenager James Bond has left school for the summer when he receives a package from beyond the grave. The mysterious contents of his fathers backpack plunge James deep into the heart of an ongoing plot that, if allowed to run its course, will paint London's streets with blood.

To finish the mission his father began, James must fly from London to Moscow, the nerve centre of Soviet Union. There he must pit his wits against a nemesis determined to destroy him - and the country he loves.

PS. Please come back on Thursday when we celebrate the release of the RED NEMESIS by doing an interview with Steve Cole, the Young Bond author himself. 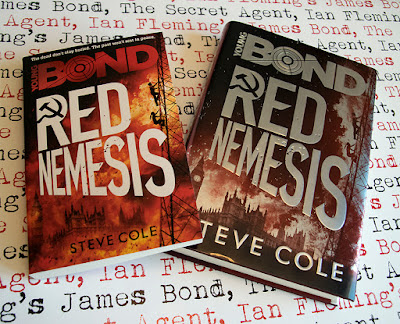