Here is a world exclusive for you! 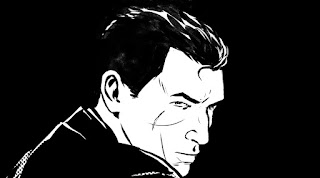 I am very proud to share whit you the blogs first world exclusive.

To celebrate that this blog JAMES BOND - THE SECRET AGENT has passed 20 000 page views in just six months and that our Facebook page very soon will pass 400 followers (just two to go). I have been in contact with the very talented Jason Masters to draw an exclusive painting of James Bond to be used as a header for this blog.

I have been waiting for his drawing for a few days when it showed up in my inbox today. And boy was I satisfied.

JASON MASTERS began his career in commercial advertising and went on to work as a professional comic book artist for DC, Marvel, and Dynamite Comics.
Masters got his big break in comics when he met Ethan van Sciver, a prominent artist for DC Comics, at a book signing in Johannesburg a few years ago. Van Sciver passed on his portfolio to his editor at DC, who a few months later, contacted him about working for DC Comics as an artist.
Masters' early work includes Human Target and Red, a comic series penned by Warren Ellis, for Wildstorm Studios, an imprint of DC. He went on to work on various Batman titles, including Legends of the Dark Knight, Batman Incorporated, Batwoman, and Nightwing. For Marvel he worked on Guardians of the Galaxy, Wolverine, and X-Men. His biggest gig arrived in 2015, when he was handpicked by comics legend, Warrren Ellis, to handle the artwork as ongoing series artist on Dynamite's high-profile relaunch of the James Bond comic book, the first all new 007 comic series in over 20 years.
The series, under the helm of Ellis and Masters, has received popular and critical acclaim and is currently one of Dynamite Comics bestselling new series. Jason Masters lives in Johannesburg, South Africa.

See the full drawing he painted fort the blog below.