I almost had a THE SPY WHO LOVED ME first edition 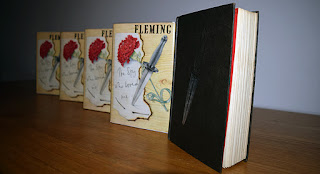 I had four copies of the Jonathan Cape edition of the Ian Fleming novel THE SPY WHO LOVED ME but no actual first edition.

I also had Jon Gilbert fantastic book Ian Fleming: The Bibliography. A book in which you can read about all the Fleming releases in both Great Britain and America.

This is what a true first edition dust jacket should have according to The Bibliography:

1. The rear panel prints opinions of Thunderball entitled "Verdicts of THE TIMES!, being seven reviews from newspapers whit the word "Times" in their title. CHECK!

4. All four corners are clipped by Jonathan Cape. CHECK!

Everything looked great so I decided to buy a Cape first edition of THE SPY WHO LOVED ME and I got it out of Ebay for £52. A few days later I received it.
But then it hit me what I have read in The life of Ian Fleming by John Pearson. Fleming often complained that he did so little profit on his books. He always felt they were to cheap for the reader so the price often increased during this time.

If you are also hunting for a First edition print of THE SPY WHO LOVED ME dont be cheated by a seller that says that their book is price clipped. Make sure that it says 15s. It would be so easy for me to price clip my book and make it look like a first edition.

PS. Today I have updated my sales page with an 1968 Airfix construction kit. It is being offered here! 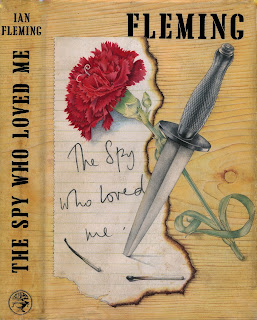 Email ThisBlogThis!Share to TwitterShare to FacebookShare to Pinterest
Etiketter: Added to the collection, First edition, Ian Fleming, John Pearson, The life of Ian Fleming, The spy who loved me